China reported its first coronavirus death at this time last year. Soon after that, new coronavirus cases started appearing in countries outside of China, including the U.S. on January 20. The World Health Organization declared the outbreak a global pandemic on Wednesday, March 11.

As the pandemic gained steam near the end of the first quarter, the Dow Jones Industrial Average lost 37% of its value between February 12 and March 23. The Dow dropped nearly 3,000 points on Monday, March 16 alone, triggering multiple trading halts to curb panic selling.

It was an unnerving time for many, especially until Monday, March 23, when the Federal Reserve, the Treasury Department and Congress stepped in and took decisive action to support the economy by passing the CARES Act, dropping interest rates to near zero and creating a $2.3 trillion package of lending programs.

The virus has since spread to nearly every country in the world, creating mass unemployment, disrupting the global economy, upending daily life and killing more than 1.6 million (374,000 in the U.S. alone). These staggering statistics are baffling when coupled with 2020’s market returns, but there is actually strong personal income, spending and saving data to support the returns.

Surprisingly, despite 2020’s steep increase in unemployment, total employee compensation (wages, salaries and other forms of workers’ compensation) was only down 0.5% from March through November 2020 as compared to the same nine months in 2019. This is because higher-paying professional jobs have been mostly unaffected and some lower-paying job sectors are booming (warehousing and grocery stores). And, thanks to the CARES Act's $600 weekly supplement to jobless benefits and $1,200 checks to most American households, Americans’ after-tax personal income was actually $1.03 trillion – 8% higher in 2020 than 2019.

On the spending front, Americans’ spending on services such as restaurants, travel, concerts and sports tickets fell by another 8% ($575 billion) in 2020. Rather than spending on services, Americans spent $60 billion more on durable goods in 2020 (home and office furnishings, lawn and garden equipment, consumer electronics, sporting goods) and $39 billion more on nondurable goods (groceries, paper products, cleaning products).

Are you nodding your head in recognition yet? Finally, on the savings front, because overall spending did not outpace overall income (in fact, total personal spending fell by $535 billion in 2020) Americans’ savings rates drastically increased.

In the period from March to November 2020, personal savings was actually $1.56 trillion higher than in 2019, a rise of 173%! To put that in perspective, Americans’ personal savings rate was around 7% just before the pandemic. It shot up to 33.7% in April, the highest level on record dating to 1959.

And, because all of this savings had to go somewhere, the options included (are you nodding again?): holding onto extra cash (which can be comforting in uncertain times), investing in stocks (which helps explain the stock market’s rise) or buying a new house (which is part of the reason why home sales surged). 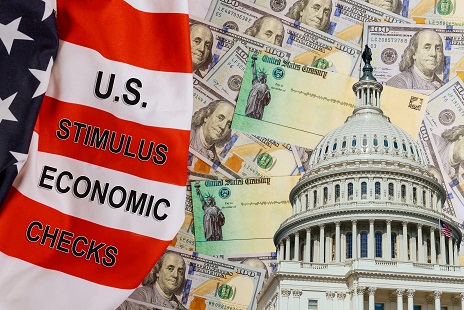 Congress finally passed its second round of coronavirus stimulus on Monday, December 21, 2020, after months of negotiation and speculation. The economic relief includes $600 stimulus payments, an extension of the time people can collect unemployment benefits and an extra federal unemployment benefit of $300 per week through March 14.

Details of the second round of stimulus payments are similar to the first amounts authorized by the CARES Act. They are $600 per eligible individual, including the taxpayer and any children younger than 17. Payment eligibility starts phasing out at $75,000 for single filers and $150,000 for joint filers.

The IRS and Treasury had until Friday, January 15 to send out second stimulus payments (via direct deposit, paper checks and prepaid benefit cards). If you don’t receive or got only part of your stimulus payment, you can claim a “recovery rebate credit” when filing your 2020 tax return.

In Closing and Looking Forward

If 2020 taught us anything, it is the importance of sticking to a disciplined financial plan and a strongly grounded investment strategy. Uncertainty is constant and often uncomfortable, however, the human traits of optimism in the face of uncertainty provide us with a path forward.

Charter Oak is grateful to serve as your trusted advisor and we look forward to seeing you in person later this year.