September provided investors with no shortage of eye-grabbing headlines. The bond markets took center stage with a story about inverted yield curves and a pending recession.

This left many people asking the question, “What’s going on and what does it mean to me?”

Charter Oak strives to provide its clients with clarity and perspective through ongoing education to help them make informed decisions. Our goal in this communication is to provide readers with a deeper understanding of the concepts behind the headlines. We believe Benjamin Franklin said it best:

“An investment in knowledge always pays the best interest.”


A yield curve is a line that plots the interest rates at a set point in time (maturity date). The yield curve is used as a benchmark for other debt such as mortgage rates or bank lending rates, and it is used to predict changes in economic output and growth.

Normally it looks like a slide at a playground, the longer distance in time the higher the interest rate. It’s the reason a 30-year mortgage typically has a higher rate than a 15-year. 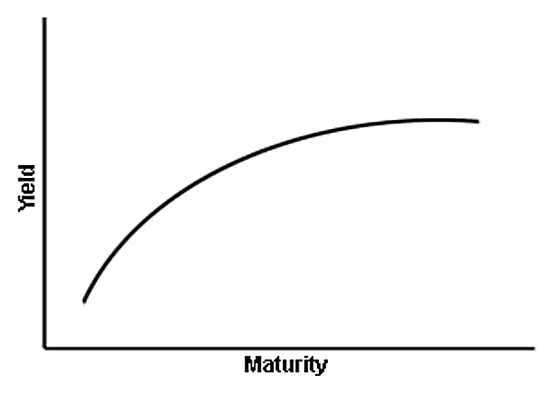 Recently, this changed when the interest rate on the 30-year Treasury, the one at the furthest point to the right on the maturity axis, fell below 2% for the first time. This causing the curve to “invert”, an image not typically found on the economic landscape. 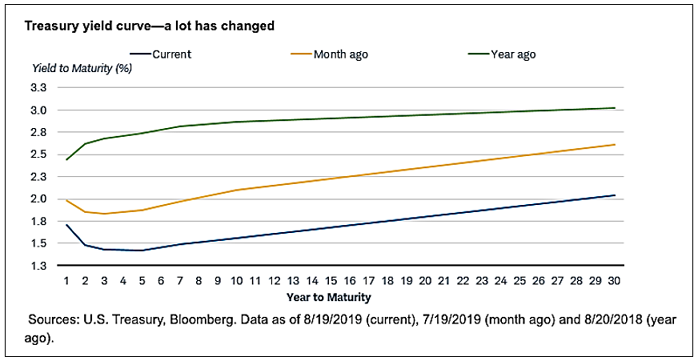 It isn’t supposed to work this way. While many of the questions investors are asking do not have easy answers, here are a few thoughts on some of the most common concerns.

Inverted yield curves are the result of both short- and long-term factors that may include:

Negative policy rates in many other countries. The European Central Bank, the Swiss National Bank, the Bank of Japan and others have pushed short-term rates to zero or below in an effort to stimulate lending and economic growth.

Slowing global growth compounded by the U.S.-China trade conflict. China’s industrial production growth rate has slowed to a 17-year low amid a falling demand for manufactured goods, while its credit growth has slowed to a crawl.

Fears that the trade war will last a long time. The perceived impact of a protracted trade war could weigh on the minds of manufacturing firms and with investors.

Does the inverted yield curve mean
there is a recession coming soon?

A humorous analogy for New Englanders: just because we typically see Canadian Geese come back in the spring does not mean the geese actually cause the change in season. 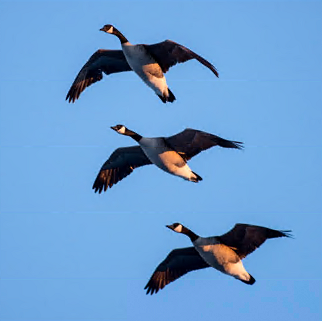 Not understanding the difference between a correlation and a causation can lead to assumptions that are untrue and acting on them may be dangerous. Just because things may be correlated, it doesn’t mean they actually cause something to happen.

“It’s different this time.” Those are the four most dangerous words in finance, but every cycle is unique. In this cycle, the unusual feature is that the inversion of the yield curve is being led by the steep drop in long-term rates rather than a sharp rise in the short-term federal funds rate.

Low rates may be the new normal. If the term premium (the amount the yield of a long-term bond exceeds that of a short-term bond) remains in negative territory for an extended period of time, it is much more likely that the yield curve will tend to be flat or inverted more frequently. Because one collects coupons on a long-term bond for a longer period of time, its yield-to-maturity will be greater in value.

Recession is a risk. Nonetheless, with the global economy weakening and the trade war at a standoff, investors are wise to be cautious.


What needs to happen to normalize the bond market?

Progress towards a trade deal between the U.S. and China that removes tariffs and addresses longer-term issues about intellectual property rights would likely send long-term bond yields higher.

Stimulus outside the U.S. There has been some speculation that Germany is considering increased government stimulus using its budget surplus to boost growth. A policy shift is underway in China to ease financing provisions to small businesses.

Inflation.  Inflation is still quite low, but there are hints that it is picking up. Labor costs are increasing slightly and the velocity of money (a measurement of the rate at which money is exchanged in an economy) has been rising - two indicators that could mean more inflation in the next one to two years than expected. With inflation presenting itself, rates would typically rise to offset the impact of rising prices.

Diversification and comprehensive planning are the cornerstones of investment management at Charter Oak.  When markets become volatile, the benefits of diversification become more visible. Having your investment eggs in different baskets has historically helped reduce risk and sharp declines in value.

Stay the course. Being present for our clients means we are focused on their long-term goals and making certain their investments are positioned in markets to help achieve them.